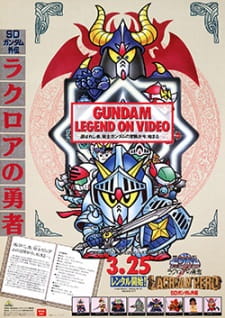 Plot Summary: In 1990, Bandai produced the 4 episode OVA series SD Gundam Gaiden. Directed by Tetsuro Amino (Macross 7, SD Gundam's Counterattack), this series is set in the medieval fantasy world Suda Doaka. Once again, popular Gundam characters such as Amuro Ray and Char Aznable are featured in the series, along with fantasy-styled versions of well-known mobile suits. In this series, the heroic Knight Gundam and his companions must protect Suda Doaka from the evils of Satan Gundam and Sieg Zeon. Much of the series is set in the Kingdom of Lacroa, which is featured in several SD productions, including the 2003 TV series SD Gundam Force. As is the case with all the older SD productions, SD Gundam Gaiden isn't available in the U.S..